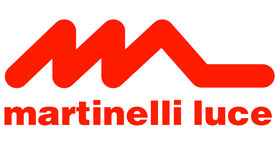 The family owned company Martinelli Luce has been designing and manufacturing high-quality lights and lighting systems for private and commercial use for many years.

The founding of the Italian lighting company Martinelli Luce goes back to 1950, when the founding father Elio Martinelli followed the desire to design his own lighting objects. Martinelli wanted to focus on stylish interior lights with an appealing design for commercial and public areas, which until now have been dominated by purely functional lights. In the course of the following years, the focus shifted and Martinelli Luce increasingly began to design living room lights for private use. Under the founder and designer Elio Martinelli, the young company made a name for itself in the 1960s and 1970s with the Cobra, Serpente and Elemetto table lamps he designed. The chic table lamps are still produced by Martinelli Luce today and have become real classics since their appearance.

Martinelli Luce has always relied on close collaboration with renowned artists such as Sergio Asti, Marc Sadler or Studio Orlandini, as well as with young talented designers such as Brian Sironi or Marco de Santi. Thanks to these creative contributions from different designers, Martinelli Luce lights have already won numerous design awards such as the Compasso d'Oro, the iF Product Design Award and the Red Dot Design Award.

All Collections by Martinelli Luce