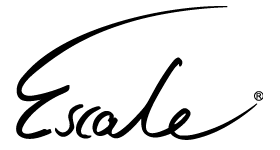 The manufacturer Escale was founded in the year 1991 as subsidiary of Linus BOPP Leuchten GmbH at Limbach. Resulting from an acquaintanceship and later friendship between the company director of Bobb Lighting, Leonhard Bopp, and the free-lance designer Mosru Mohiuddin – born at Bangladesh and grown up in England – in the year 1988 the idee was born to produce products which don´t have to follow a trend, don´t have to suit a price shema and don´t have to meet customers´ expectations.

Finally they created products at which designer and producer were able to be creative. In this start-up period of time it was not important for them whether the product would sell at all or even well. After the first presentations of these extravagant products in the beginning of the 90s at Frankfurt, at that time still under the name Bopp Lighting, they realized that the clientele for that kind of product was a completely other one than that one for Bopp products.

On this account in the year 1991 the company Escale was founded. The name Escale is originating from escalate, which refers to the escalation of the creativity of both company founders. At the beginning the Escale products were still marketed together with the Bopp collection. In the middle of the year 1995 then the two collections were separated definitely. At that time a steady development of an independent Escale distribution channel in the lighting sector was started. Since then the manufacturer Escale has stayed successful, due to the fact, that Escale has remained true to its principles. One of its principles is the production at their seat in Germany.

All Collections by Escale