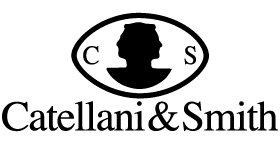 All Catellani & Smith Lights and Lamps

Catellani & Smith lamps are the epitome of Italian craftsmanship. The successful Italian design label continues to manufacture entirely by hand and in small quantities. No lamp is completely the same, each is unique.

The Italian designer Enzo Catellani founded the company in 1989 in Bergamo, where the factory and showroom are still located in an old, rustic mill.

His first catalog showed how creative and imaginative Enzo Catellani is, in which he dedicated the founding of the company to the Italian blacksmith Carlo Catellani and the British architect Logan Smith. His father's real name was Carlo, and Logan Smith was his horse at the time. This story not only testifies to the esprit of the designer, but also to his way of not taking himself too seriously, but rather letting his work speak for itself. Catellani initially created lighting installations for churches, museums or trade fairs - with resounding success. The high demand will soon result in the serial production of commercial designer lights.

The crisis in the German lighting market in 2004 prompted Catellani to no longer manufacture his creations from glass, but from composite materials that could be shaped according to his taste. He discovered glass wool, the fabric of which he changed so that suggestive shadows are created on the wall. This was the birth of the Post Krisi lighting series, which contributed significantly to the international success of the brand.

Under the motto “Eco-Logic Light”, Catellani & Smith has been using LED technology since 2008. The focus is not only on energy efficiency, but above all on the quality and color of the light that exudes calm. Catellani uses LEDs to construct minimalist luminaires, but also illuminates the popular reflector panes refined with gold or silver leaf. For the Eco-Logic collections such as Moon, PK LED or Sorry Giotto, Catellani transfers known motifs into a new generation of light.

Even if the lamps from Catellani & Smith lamps are sold worldwide today and are among the showpieces of Italian lamp design, the company still works as a workshop. Although it is divided into different production units, each with ten to twelve people, the production is still subject to real manual work today.